When autocomplete results are available use up and down arrows to review and enter to select.

Action Another action Something else here
CHARACTER COUNTS!

When CHARACTER COUNTS! was introduced in the Tulare County Office of Education's court schools program in 1994, no one could have predicted the impact it would have on Tulare County's youth. The program was so successful with students on probation that then County Superintendent of Schools Jim Vidak committed his office to making the program available to school districts, service agencies, and other facets of the community. To insure the program reached all of the county's 43 school districts, Superintendent Vidak hired a full-time coordinator for the program in 1996. CHARACTER COUNTS! is now the main source for character education in Tulare County. Over 4,000 teachers, parents and community members have been trained in the program.

The response from the students of Tulare County has been phenomenal. During National CHARACTER COUNTS! Week in October 1996 and 1997, Kids of Character rallies held in Visalia's Sunkist Stadium brought together over 1,100 students at the first activity and more than 4,000 at the second! Over 100 students were honored as "Kids of Character" in 1996, and twice that number in 1997. As a result of the vision of Superintendent Vidak, character education has become an integral part of the educational experience as proven by these events, which were the largest celebrations of this type in the entire country.

In 1998, the goal of districts holding their own celebrations became reality, while the Tulare County Office of Education continued its popular program that honored individual "Kids of Character." During CHARACTER COUNTS! Week in October 1998, a Kid of Character was featured daily in the Visalia Times-Delta, Tulare County's largest newspaper, and nearly 500 additional young people were honored by the newspaper. During the 2021 CHARACTER COUNTS! week, more than 5,000 youth were recognized, a spectacular demonstration of the community's continued support of the CHARACTER COUNTS! program. 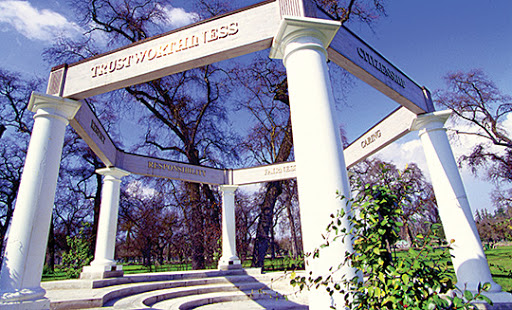 The success of TCOE's CHARACTER COUNTS! program is evidenced in many ways. Perhaps the most impressive and visible is Pillar Square, which stands in the county's most popular park as a symbol of Tulare County's commitment to character education. The Tulare County Office of Education is justly proud of the difference CHARACTER COUNTS! is making. TCOE will continue its enthusiastic promotion of the program as part of its mission to "promote lifelong learning opportunities that will help individuals lead healthy and productive lives."